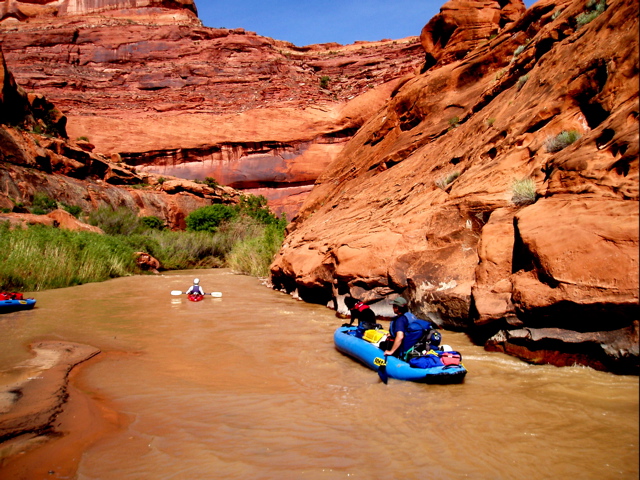 Here are the answers to the most frequently asked questions. If you have any additional questions, let us know by using the form at the end of this page.

Hypalon is a rubber DuPont coating that has been used in manufacturing the best quality inflatable boats for nearly 50 years. Along with neoprene, hypalon is the most time-proven coating for long lasting durability and abrasion resistance. Rafts such as Avon and Achilles, along with military-spec Zodiacs, are built with hypalon.

How strong is a SOAR boat?

SOAR boats are built with a 30 oz. hypalon coating on the tubes and the top of the floor surface. The bottom of the floor is coated with 40 neoprene coating. An 840 denier nylon base fabric all over provides excellent puncture and tear resistance.

Wilderness adventurers choose SOAR because it can handle “the rough stuff” — like taking direct hits from rocks as you pound your way down the narrow Selway on an August run, running over downed limbs on a swift moving river, or dragging your boat over shallow gravel bars on the Escalante.

What colors are available?

Although the photos show blue and white, blue is the only color currently available.

Can a dog’s claws hurt a SOAR?

Lots of SOAR owners take their dogs along in their SOAR’s. The hypalon fabric is very tough, and dogs’ claws have not been a problem.

I want to take a SOAR down medium size rivers in VT and NH that will hold up to hitting some rocks on the bottom now and then.

SOAR boats can take the rocks. Our neoprene floors are very rugged, and SOAR canoes are very stable under such circumstances.

What is the grommet strip that my friend says is so great?

There is a grommet strip that runs down each tube. The grommets are spaced every 6″ apart. The grommets are used for lashing seats and gear into the SOAR. Seats can be moved depending on the number of people paddling and for optimum weight distribution.

A SOAR inflatable canoe has many differences. First, the floor of an IK is built so that the bottom of the IK floor is even with the tubes. The average distance from the top of the floor to the top of the tube is 7″. The paddler is required to sit on the floor with their legs in front of them, taking up valuable cargo space.

The floor of a SOAR inflatable canoe is built lower than the tubes, providing many advantages. First, you get more interior space, allowing more room for gear. Also, the seat is placed higher in the boat, so the paddler sits higher and can read water better. There is so much space in our boats, it’s possible to get 3 passengers in our S12, and up to 5 in our S16. It’s not what we recommend, but it is certainly possible and has been done many times!

Do I have to use a canoe paddle?

No, our boats can be paddled easily with a kayak paddle. We recommend an 8 ft (240 cm) kayak paddle or longer. A canoe paddle should also be a minimum of 60 inches in length for most adults. Many SOAR owners paddle with canoe paddles when they are paddling with a partner, and use the kayak paddle when they paddle solo.

You have a choice of either sitting on a bench seat or kneeling on the inflated floor with your butt on the seat. Kneeling is the preferred position for whitewater paddling. Many SOAR owners enjoy sitting or lounging on the very comfortable floor!

What is your self-bail / non-bail feature?

All SOAR’s have bail ports pre-punched in the floor, and are delivered with the ports sealed via a neoprene patch that covers them. There are 4 sets of 5 1″ bail ports. To turn a boat into a self-bailer, remove the neoprene patches prior to use. Should you want to re-seal the ports, simply re-glue the patches. Duct tape also will seal the bail holes somewhat effectively, too!

Wouldn’t I always want to keep the bail holes open?

That depends on your usage. If you are getting water in over the sides of the tubes, then it is best to have the bail ports open. Some water will come into the bottom of the SOAR, but the paddler will only notice water on the floor when they are either kneeling, when there will be a small pool at your knees, or when you are standing. There will be a small pool at your feet. A SOAR under motor-power definitely needs to keep the bail ports closed.

I would like to know how appropriate your boats are for different classes of whitewater.

SOAR’s can be paddled in any whitewater you are comfortable with. SOAR’s are very stable, forgiving,and extremely maneuverable, but it really depends on your level of expertise. Our boats have been paddled down large rivers with major rapids like the Grand Canyon and Alsek, as well as smaller technical rivers and creeks like the Chattooga and Selway.

Would you recommend the S14 or S16 for two people and a dog? We typically go on trips from 3-4 days and take related gear. Is there a big difference in the maneuverability between these two sizes?

We definitely recommend the S16. Maneuverability differences between the S14 and S16 won’t be a function of size, but of cargo load. The heavier the load, the less maneuverability. That said, you can load up an S16 and maneuver the heck out of it.

Where is the dealer closest to me?

We sell direct from our offices in Healdsburg, California. All SOAR’s come with a 30-day satisfaction guarantee.

During storage, should I keep my SOAR rolled tight or packed loosely?

SOAR’s can be stored tightly rolled without any detriment to the fabric or the coating. However, it is highly recommended that it be thoroughly dry before long term storage, and stored in as dry a place as possible.

My wife refuses to go out with me in our royalex canoe. How do you think she will like a SOAR?

She’ll love it! Just don’t go taking her down some big rapid her first time out! Here’s what she will like about the SOAR: They are very stable and comfortable, plus there are no hard edges to bruise her legs.

I hear SOAR’s are built in Taiwan. How come you don’t build them in the U.S.?

Hypalon is very labor intensive, and the design of the SOAR is more sophisticated than most other inflatables. Our Taiwanese factory produces a top-quality product that we can offer for a reasonable price. Several years ago, Bill Wing of Wing Inflatables told me when he tried to build his version of the SOAR canoe, he found that his in-factory cost was SOAR’s retail price. We would never be able to offer a SOAR for anywhere near the price we do if we had it made elsewhere.

That said, all SOAR accessories are made in the USA. The duffles, seat backs and thigh straps are made in Missouri, paddles, straps and d-rings in Oregon, motor mounts and seats in California, and our new rowing frame and lashing bars are made in Minnesota. With SOAR you can get the best of both worlds: quality manufacturing at affordable prices.

Didn’t see the answer to your question?

A Division of the SOAR Adventure Group